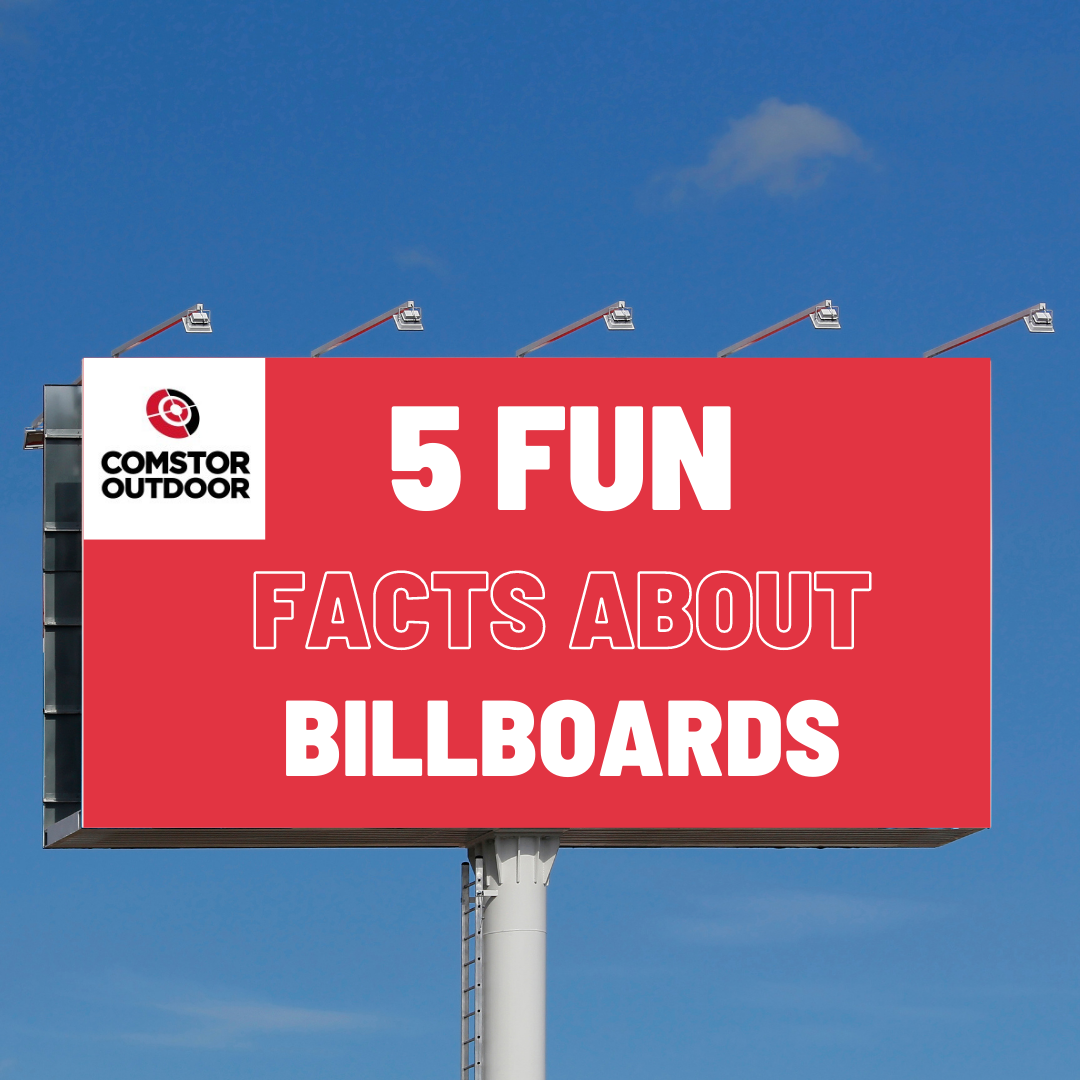 Billboards are everywhere, right? You likely see several a day. Despite the efforts of social media, the Internet, and technology in general, billboards are still an effective marketing strategy today.

Invented by Jared Bell in the 1830s, billboards have been around for a long time. . . and they’re not going anywhere anytime soon!

To showcase our fun side a little bit, the COMSTOR Outdoor team is sharing five fun facts with you about billboards. Are you ready?

5. The world’s biggest billboard can be seen in Madrid.

Most people believe the world’s biggest billboard resides in Time’s Square—and they’re wrong! In the past few years, Madrid, Spain unveiled a billboard that is 5,265 square meters in size. To give you a better understanding of just how big that is, it’s as big as 20 tennis courts, an American football field, or a male hippo (in weight).

4. Electronic billboards have been seen for over 100 years.

Many individuals believe that electronic billboards are something new and happened only in recent years. And, again, they’re wrong! Specifically, the electronic billboard’s history can be traced back to over 100 years ago. Oscar J. Gude, a billboard pioneer, installed one of the first electric signs in the world in 1904. The location? New York City.

3. Billboards can be scented.

Your senses are important. They tell you what you like, want, and need. Therefore, it only makes sense (see what we did there?) that a marketing campaign would play to your sense of smell. Well, maybe.

In 2010, a grocery store in North Carolina created what is believed to be the very first scented billboard—ever. It smelled of grilled steak. The ad may have created a lot of media buzz, but not a trend.

2. The most expensive billboard in the world costs. . .

Care to take a guess? If you said $2.5 million, you’re correct! That’s right, the most expensive billboard in the world (this one happens to be in Times Square) costs Google $2.5 million.

Was it worth it? Based on the daily average traffic of 300,000 people, it’s estimated that nine million New Yorkers and tourists with see the ad. (Of course, these figures are pre-COVID.)

It has been estimated that individuals may be exposed to up to 4,000 ads per day. If you have a product or service you want to get noticed, you’re going to have to get creative and stand out!

Arbitron did a study that revealed 71 percent of people reported not just seeing billboards—but also knowing what’s on them and the message they were delivering. Are these facts new to you, or were you already aware of them? Regardless, you now know—without a doubt—just how effective billboard marketing can be. Learn more about billboard marketing and what COMSTOR Outdoor can do for you and your advertising needs by clicking here.